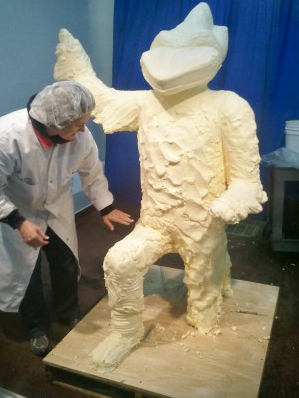 When Iowa State’s colleges decided to amp up their efforts for the Cytennial celebration of homecoming, the College of Agriculture and Life Sciences decided to go big or go home.

In a brainstorming session, the university tossed out the idea of having Cy carved out of butter, thinking the whole idea was impracticable. But Melea Licht, communications specialist for the College of Ag, thought the idea was perfect and could be done.

“I thought it was great idea,” Licht said. “It’s not often you get to see an artist in action, and it’s a hands-on way for Iowa State’s role in the agriculture industry to be on display during homecoming.”

Pratt said the timing could not have been better for the College of Ag to reach out to her about creating Cy out of butter. Pratt is currently on maternity leave from her job as a teacher in West Des Moines.

“I was really excited to be a part of the Cytennial,” Pratt said. “I am always looking for ways to carry on the tradition that Norma started … of making butter sculpting an Iowa institution.”

Pratt was an apprentice of Lyon for 15 years. She learned the techniques of sculpting with butter on the butter cows they created over those 15 years. Pratt said her favorite part of working with Lyon was listening to her stories of growing up on an Iowa farm.

Pratt said she does not have an apprentice yet but has worked with Lyon’s grandson, Todd Lyon, senior in computer engineering at Iowa State. Todd also worked with his grandmother.

Today, Pratt can still hear Duffy’s voice pushing her out of her comfort zone.

“When I was approached by the “Today Show” last year to represent butter sculptors in their state fair special, I found a hundred reasons why I was too busy or why I shouldn’t,” Pratt said. “But Norma’s voice told me ‘Just do it Sarah,’ so I did.”

Pratt said Lyon did an excellent job of teaching; her hands have memorized how to carve a cow out of butter. Her favorite sculpture, and the one closest to her heart, is when she sculpted a young girl with a butterfly as a tribute to Lyon in 2011.

With other sculptures for the Iowa State Fair, such as the young girl or this year’s seven dwarves, Pratt does a lot of research. For this project, she Googled Cy, drew many different sketches and took measurements of the Cy sculpture located in front of the Alumni Center on campus.

Pratt has assistance from her brother, an alumni of Iowa State. Her brother, a mechanical engineer, helped her build the armature, or frame, under the butter.

“Cy’s head is going to be the hardest part to sculpt and get right,” Pratt said, “Every one of my sketches made Cy look like a Teenage Mutant Ninja Turtle.”

The Midwest Dairy Association is sponsoring the butter that goes over the frame. When the project is finished, Butter Cy will be made of more than 300 pounds of butter, which will be melted down at the end of the week to be used for the butter sculptures at the 2012 Iowa State Fair. Pratt said watching her art melt does not make her sad and she is actually okay with not creating a permanent sculpture.

People can watch Pratt in action in Kildee Hall through a window into an ISU Meat Laboratory display cooler.

Matt Winger, a representative of the ISU Meat Lab, said sponsoring and hosting the Butter Cy gets publicity to students who do not know about the state of the art, federally inspected facility and the meat science program available at Iowa State.

“The cooler Cy is being created in was originally built for students to observe meat carcasses on display,” Winger said. “But nothing special had to be done for Sarah to carve in the cooler.”

Cy himself will make his way to the cooler Friday to see the finished project and thank Sarah Pratt for all her hard work.